Sex, gender and sexual orientation are related but distinct terms.

Intersex refers to several conditions where someone is born with a sex that doesn’t fit our typical definition of male or female. For example, someone with Androgen Insensitivity Syndrome (AIS) has XY chromosomes and a vulva. Some intersex conditions are visible at birth (such as a baby born with a noticeably large clitoris, or a scrotum divided like labia) and others are not.1 This means that, without genetic testing, some intersex people are assigned male or female at birth and may not find out they are intersex until later in life.

Sex is therefore not binary, like many people believe it to be.

Bisexuality can refer to people attracted to men and women, or to their own gender and other genders (inclusive of nonbinary gender identities). Regardless of who a bisexual person is sexually or romantically involved with, they are always bisexual (e.g., a bisexual woman dating a man is still bisexual, not straight).

Pansexuality refers to people attracted to others regardless of gender.

Queer is an umbrella term for a range of gender and sexual identities. Because of its historical and contemporary use as a slur, especially towards feminine gay men,4 some do not like the term. However, “queer” was reclaimed as a political statement and badge of courage by some activists during the Stonewall Riots and the AIDS Crisis,5 and continues to be used by many people with varying definitions.6

Importantly, all the identities listed above are valid and normal.

The only person who can define your identity is you, based on which definition you feel fits you best. It is completely valid to change the way you define your identity over time or to choose to not label it at all. When referring to someone else’s identity, it’s important we use words they do (e.g., we shouldn’t use the word “queer” to describe someone who has told us they identify as bisexual).

Why are there so many new words?

Gender and sexual diversity have always existed, across time and across cultures, and many languages have words or terms to represent this diversity. The reason so many new English words have been and continue to be made is to recognize the existence of this diversity. Because our society normalizes the experiences of cisgender, straight, sexual people, those who exist outside of these identities (i.e., transgender, queer or asexual people) can be made to feel broken or confused. Having a word to identify oneself allows people to understand their own gender and sexuality, communicate it clearly and make connections with the same identity.

Discrimination and Oppression Based on Sex, Gender or Sexual Orientation

Sex, gender identity, gender expression and sexual orientation are protected grounds of the Ontario Human Rights Code8 meaning that actions that discriminate against people based on these are prohibited. This kind of discrimination is also covered within McMaster’s Discrimination and Harassment Policy and Sexual Violence Policy. Such discrimination can be both subtle and overt.

There are several terms to describe the discrimination and oppression of people experience because of their sex, gender or sexual orientation.

Sexism is oppression by men against women, intersex, transgender and gender non-conforming people.9 Men can experience discrimination and prejudice based on their gender, but this is not considered oppression due to systemic power that men have.

Transphobia refers to the “fear, hatred, disbelief or mistrust of people who are transgender, thought to be transgender or whose gender expression doesn’t conform to traditional gender roles”10 and is perpetrated by straight/cisgender people and even by others within the LGBT community.11 The Trans PULSE Project has shown that transphobia is common in Ontario.12 Examples of transphobia include deadnaming (using a trans person’s name from before they transitioned), referring to someone by the incorrect pronouns or de-humanizing pronouns like “it” (see ”Pronouns” section below) and denial of healthcare.

Transmisogyny, coined by Julia Serano, is used to better describe the marginalization of trans women, based in the assumption femininity is inferior to masculinity. Trans women are routinely demeaned, sexualized and ridiculed in media and more often pathologized by psychiatric diagnoses than trans men. Trans women also experience disturbingly high rates of violence.13

Cisnormativity is the assumption that everyone is cisgender, resulting in often unconscious bias that privileges cisgender identities and gender norms and ignores the existence of trans identities.14 Cisnormativity is often invisible to cisgender people while sending a message to transgender people that they are not welcome. Comments that equate reproductive organs with gender enforce cisnormativity. For example, using language like “feminine products” to refer to pads and tampons unnecessarily associates menstruation with femininity and ignores the reality that some women (including transwomen) don’t menstruate while some nonbinary folks and transmen do menstruate. A more accurate, inclusive term would be “menstrual products.”

Homophobia refers to “the fear, hatred, discomfort with or mistrust of people who are lesbian, gay or bisexual.”15 Examples of homophobia include using language like “that’s so gay” to describe something as bad and “no homo,” typically used by a man to assert his heterosexuality after complimenting another man, or outright bullying and violence towards gay, lesbian, bisexual, pansexual, asexual, and aromantic people. Internalized homophobia refers to gay, lesbian, bisexual, pansexual, asexual and aromantic people who turn their homophobia onto themselves and feel disapproval for their own sexuality.15

Heteronormativity is the assumption that everyone is heterosexual (straight), resulting in often unconscious bias that privileges heterosexual identities and ignores the existence of gay, lesbian, bisexual, pansexual, asexual and aromantic people.14  Heteronormativity is often invisible to straight people while sending a message to gay, lesbian, bisexual, pansexual, asexual, and aromantic people that they are not welcome. This can manifest in everyday items like a simple form that asks for mother’s and father’s information (which could be resolved by asking for information on parent 1 and parent 2, if applicable) or comments like calling a young boy a “ladies’ man,” which assumes that a young boy is heterosexual and could create a sense of internalized shame for him if this isn’t true.

Bisexual erasure or invisibility refers to the “existence or legitimacy (either in general or in regard to an individual) is questioned or denied outright.”16 For example, a bisexual woman in a relationship with a man might be told she can’t be bisexual because of her partner’s gender.

Pronouns are the words we use to refer to someone without using their name (such as “I” or “you”). When referring to someone in third person, we have to use the correct pronouns. Some people use the gendered pronouns “he/him/his” or “she/her/hers,” and some use genderless pronouns like “they/them/theirs” or “zie/zim/zir.” Some people may also use multiple sets of pronouns, like “she/her” and “they/them,” which could be written as “she/they.”

We often assume someone’s gender and pronouns based on their appearance, however our assumptions aren’t always right and can cause harm. Using the correct pronouns is a way of showing respect.17

For cisgender people, including your pronouns in your email signature or when you introduce yourself (“Hi I’m LJ, I use he/him pronouns”) are simple and effective ways to normalize the idea that we shouldn’t assume others’ pronouns. For transgender people, the choice to include pronouns in signatures and introductions is one to make when you feel safe and comfortable to do so.

1Intersex Society of North America. (2008).  What is intersex? https://isna.org/faq/what_is_intersex/

3National Center for Transgender Equality. (2018, October 5). Understanding non-binary people: How to be respectful and supportive. https://transequality.org/issues/resources/understanding-non-binary-people-how-to-be-respectful-and-supportive

17My Pronouns. (n.d.) What and why. https://www.mypronouns.org/what-and-why 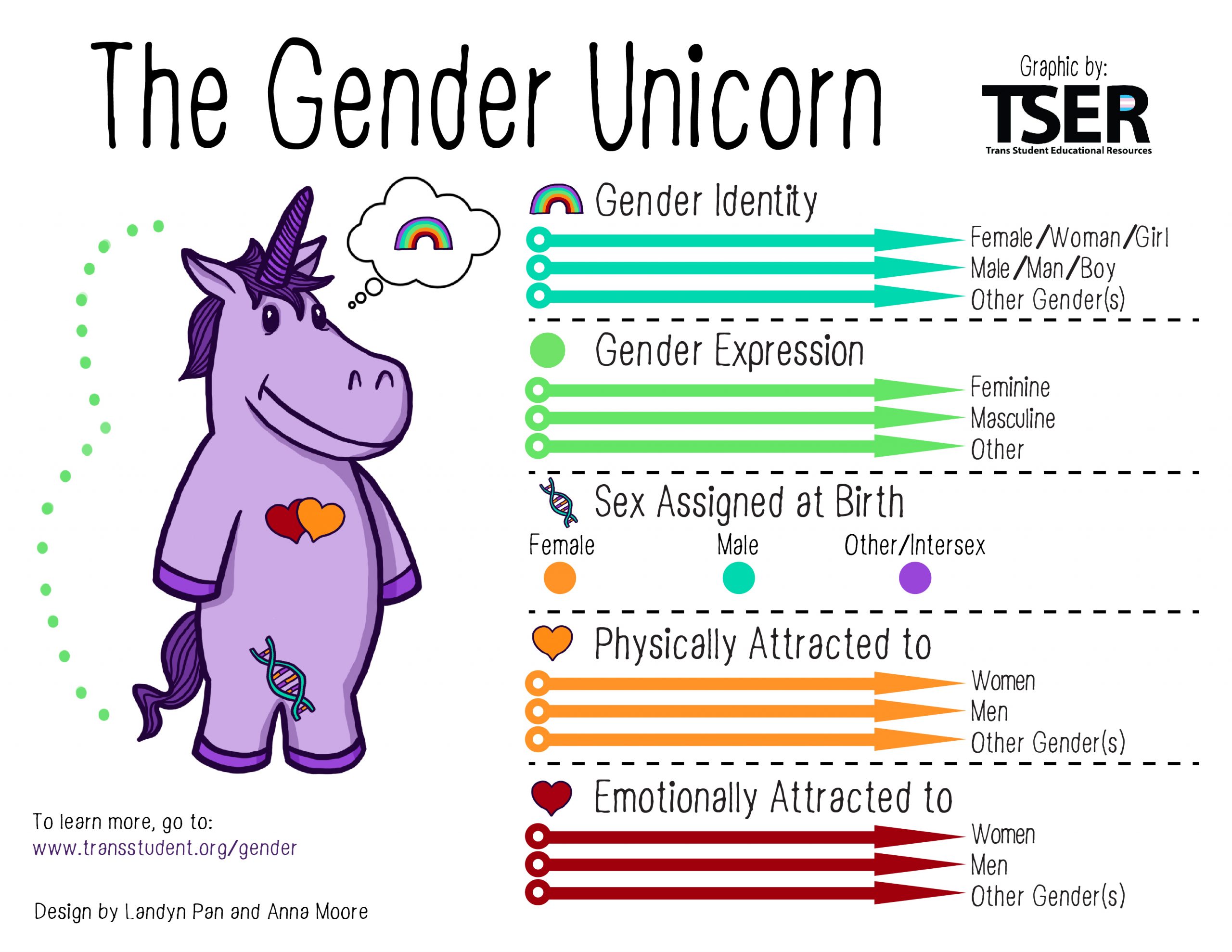